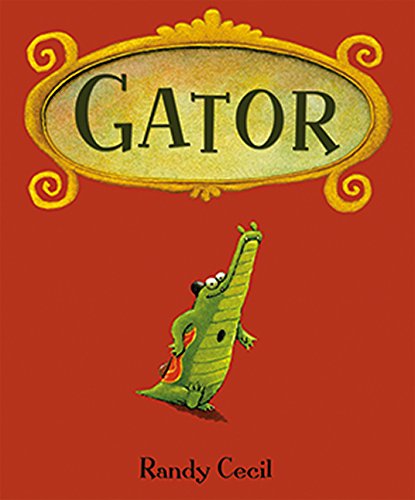 Gator, who is a grinning green merry-go-round fixture and not an actual reptile, recalls a time when the amusement park was popular with children. Gradually, crowds stop coming, and the hurdy-gurdy days fade. Gator imagines the ride operating and "the wind on his face. But it was only a spider attaching its web to his snout." Somehow (not shown in the pictures) Gator detaches from his carousel pole, leaving a "hole in his heart." Waddling like a penguin, he follows the sound of laughter to a zoo, where his painted-on saddle distinguishes him from the (mostly) sleeping alligators. Cecil's ( ) nostalgic tale echoes many classic books. Like the Velveteen Rabbit, Gator isn't real enough to blend with living creatures; like Virginia Lee Burton's Little House, he is old-fashioned but sturdy. His quest, like theirs, ends with a lucky break: a boy hears Gator sniffling, and the boy's father recognizes Gator, leading to a revival of the decrepit carousel. Soon "everything was just the way it used to be." Cecil's shadowy, sepia-tinted oil paintings recall the art for Fred Marcellino's , but attached to a rather maudlin story. Even if Gator's desire to reverse time is understandable, the wishful conclusion feels false rather than magical. Ages 3-5.