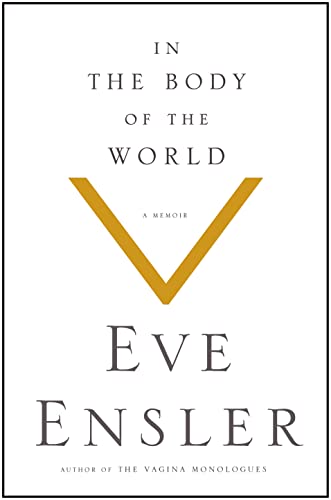 In the Body of the World

In this extraordinarily riveting, graphic story of survival, Ensler, an accomplished playwright (The Vagina Monologues) and activist in international groups such as V-Day, which works to end violence against women, depicts her shattering battle with uterine cancer. Having felt estranged from her body for a lifetime, and been molested as a girl by her father and enthralled by alcohol and promiscuity early on, Ensler as a playwright was seized with a political awareness of the dire violence committed against women across the globe. At the age of 57, she was blindsided when she discovered that her own health emergency mimicked the ones that women were enduring in the developing countries she had visited: "the cancer of cruelty, the cancer of greed... the cancer of buried trauma." Her narrative, she writes, is like a CAT scan, "a roving examination%E2%80%94capturing images," recording in minute, raw detail the ordeals she underwent over seven months. These include her crazed, "hysterical" response to the diagnosis and her treatment at the Mayo Clinic in Rochester, Minn., as well as extensive surgery, chemo, radiation, and caring by a "posse" of companions in misery, like her estranged sister, Lu, and far-flung friends such as Mama C, the head of the City of Joy women's center in the Congo. Her anatomy of the invasion of women's bodies is often difficult to read; the lesson she learns is that in order to heal, she has to submit her body to a renewed source of love and joy. (Apr.)
close
Details