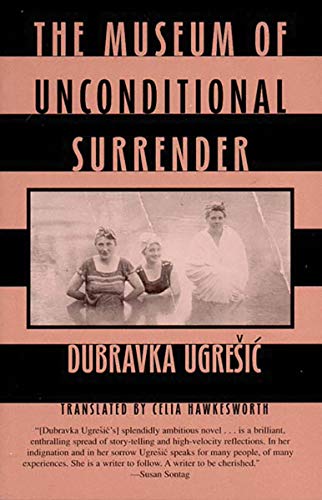 THE MUSEUM OF UNCONDITIONAL SURRENDER

Ugresic has designed this fragmented narrative of war-ravaged contemporary Eastern Europe carefully, so that her portrait of the stalwart but traumatized citizens, offered as a series of closeups, is not entirely available until the very last piece has fallen into place. The bulk of the book's narratives describe the lives of characters in various socioeconomic cubbyholes in major Central and Eastern European cities such as Berlin and Moscow; these translucent and occasionally magic-realist stories of transformation illustrate the repercussions of change within the private sphere convincingly and sometimes whimsically. In one episode, four young women playing cards are visited by a man claiming to be an angel. He gives a small feather to three of the four; upon swallowing the feather, these woman find that their lives are changed. In a pair of linked narratives, an elderly mother wonders about her middle-aged daughter, living far away from her; the daughter, in turn, imagines her mother's immigration from Bulgaria to Yugoslavia in 1946. Ugresic balances close observation of private moments with prescient (if seemingly randomly offered) sociological and historical insights, peppering the book with eye-catching quotes by Shklovsky, Nabokov and others that help to describe how the independent existences of city dwellers might reflect the lives of entire countries. Ugresic pries deeply into the lives of her subjects, using many personal and luminous details to make this muralistic work all the more affecting. As the book progresses, images repeat and harmonize across narrative boundaries to create a grim but uplifting picture.