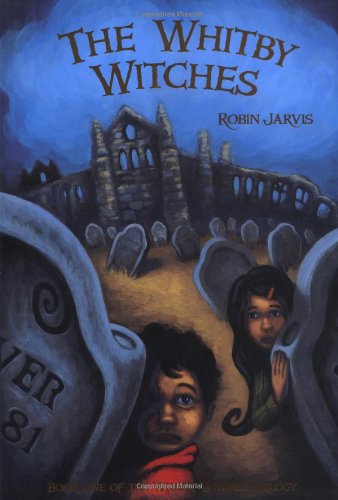 Jarvis's (the Deptford Mice trilogy) story of witches and creatures from the sea stars orphans Jennet, 12, and eight-year-old Ben, who are brought to live with their Aunt Alice in the seaside town of Whitby. Ben, who has seen visions of ghosts all his life, has a particularly terrifying night during which the house seems filled with them. Jennet learns that Alice and the old ladies of the village are witches who engage in a monthly séance. Later, Ben meets an ("wanderer of the shore") in a cemetery, "eyes as big as his fists and as gray as the stormy sea"; he learns how one of these "fisher folk" once married a human and bore a child, which brought about a curse from the Lords of the Deep—and Ben holds the key to finding the "moonkelp" that can overturn it. Meanwhile, evil socialite Rowena Cooper also seeks the moonkelp for her own purposes, and is not above committing murder to get it. Petersen's full-page half-tone illustrations bring the in particular to life and enhance the story's somewhat dark, nautical feel. The book ends on a tantalizing and somber note, with major foreshadowing for Ben in the subsequent volumes. Ages 8-up.