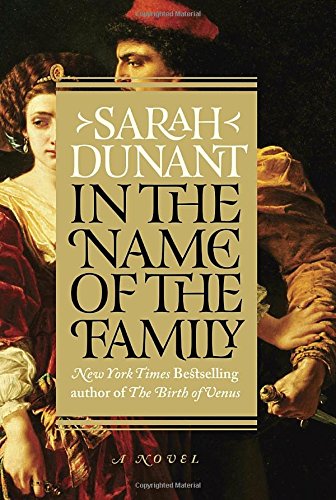 In the Name of the Family

Renaissance doyenne Dunant (Blood and Beauty) turns her sights once again on the Borgia family. Pope Alexander VI is firmly entrenched in his powerful position, consumed with revenge against his enemies. His ambitious son, Cesare—with access to the church coffers—is spurred to take over more and more of Italy’s city-states, no matter the cost in money or lives, and his daughter, Lucrezia, a pawn in the power-hungry plans of her family, makes her own mark on 16th-century Italy. As the Borgia clan extends its reach, whether through bloody confrontations or cunning behind-the-scenes maneuvering, historian and diplomat Niccolò Machiavelli has a front-row seat for the various machinations, observing their stunning moves while advising his superiors in Florence how to deal with the changing political climes. Although the author occasionally gets caught up in some of the distracting internecine workings of factions against the pope (their opponents were many), Dunant is at her best focusing on the three Borgias, especially the conflicts between Cesare and his father as both gain in power and stature, and most particularly on the life of Lucrezia, forced into different marriages for political benefit, nearly dying from a debilitating flu, and finally coming to terms with the enigmatic Alfonso, son of the duke of Ferrara and her third husband, with whom she ensures the future of a powerful dynasty. (Mar.)
close
Details