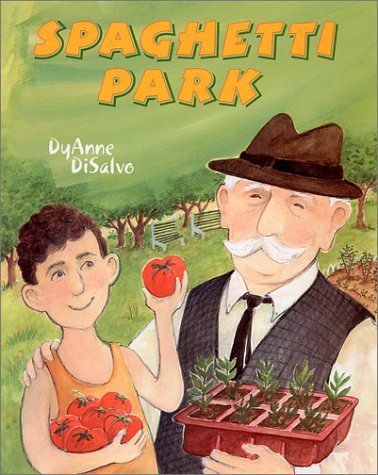 Much in the vein of DiSalvo's and , this earnest if somewhat pat story features a young activist as narrator. Angelo laments that few people now come to the park in his Italian-American neighborhood, since teenage "troublemakers" have begun playing their boom boxes too loudly and have "whipped up" the swings so that children can no longer use them. But Angelo continues to frequent the park with Grandpa, who is teaching him to play the Italian bowling game, bocce. Grandpa's peers look on, bragging about their own past feats on the bocce court—exaggerated claims that Grandpa calls "spaghetti benders." At a meeting of the neighborhood group, Angelo suggests that a bocce court be constructed in the park, whereupon a local politician announces, "If we all work together, we can make that park into something for everyone." Predictably, the neighbors all pitch in to clean up the park—even one of the tough kids. A setback (one morning the graffiti reappears and the newly planted garden is crushed) is quickly redeemed: the one-time troublemakers surprise everyone by cleaning up the damage. The brightly hued, gouache illustrations are better than the text at conveying the characters' bountiful energy and changeable emotions, and kids may enjoy the bocce subplot as well as the game's instructions at the end. Ages 4-8.