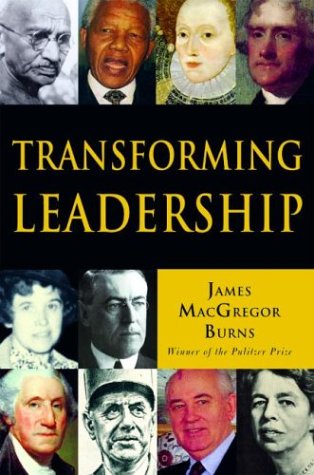 Twenty-five years after the publication of , Burns expands upon his theories about how leaders cultivate their successors to explore how they create environments conducive to social and personal development. He distinguishes between "transactional" leaders, who thrive on cutting deals, and "transforming" leaders, whose sweeping changes totally revamp political institutions. Although the book relies on a variety of historical examples, it devotes particular attention to Franklin Roosevelt, about whom Burns has written extensively in the past (; ). Burns's underlying theory imagines leadership as part of a broader social process in which leaders and followers are closely interrelated. Starting with psychologist Abraham Maslow's theories of the hierarchy of human needs, the book suggests leaders attain their power through their responsiveness to others' desires for security, self-esteem and personal development, putting themselves in a position to "create and expand the opportunities that empower people to pursue happiness for themselves." As such, leadership is an inherently positive process, distinguishable from tyranny by the latter's inability to promote liberty and equality. Amusing asides, in which Burns describes how he attempted to apply his understanding of leadership principles to raising his children, enliven the scholarly consideration of leadership's evolution over the centuries. These accessible anecdotes, as well as Burns's explications of historical examples, will ensure the book's influence extends beyond its most obvious implications for political science.