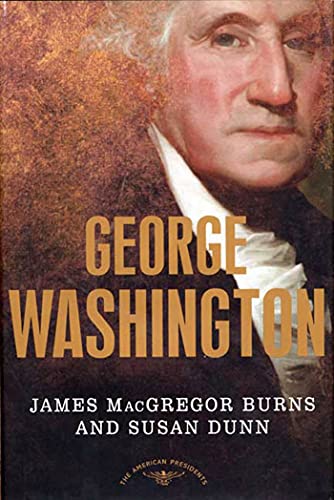 Like other volumes in the American Presidents series, edited by Arthur Schlesinger Jr., this biographical essay focuses on a handful of themes through which to examine Washington's life before and during his presidency. The book's first half examines how Washington, "ferociously ambitious" and "fiercely protective of his own reputation," meticulously crafted his public image, even years before the American Revolution, to emphasize the virtues of self-sacrifice and dignity. While acknowledging the extent to which Washington craved esteem from others, the authors are basically sympathetic, framing his ambition within the context of his role in defining the young nation's political institutions. In fact, Washington is somewhat invisible during passages depicting the power struggles among subordinates in the first administration. This allows Burns (a Pulitzer winner for ) and Dunn (also Burns's coauthor on ) to build on the former's theories about "transforming leadership" (which he presented in a book of that title) and to praise Washington's creation of a collective leadership, rather than establishing a solitary ruling authority, as an achievement "never to be surpassed in American presidential history." The authors also offer a frank appraisal of how Washington inadvertently sowed the seeds of political discord even as he developed national unity. This compact appraisal won't radically alter anybody's perspective on Washington. But its points are made briefly without sacrificing substance.