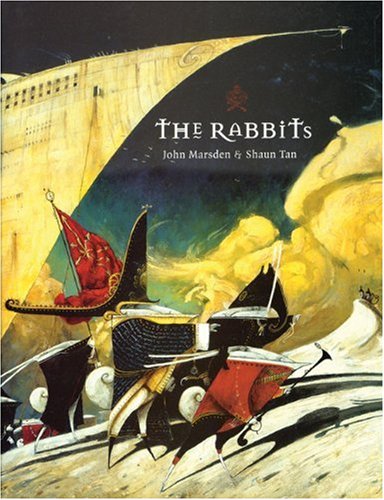 In this sobering allegory of colonization, Napoleonic white rabbits subjugate a population of gentle brown marsupials. The lemur-like narrators live humbly in an arid region ("At first we didn't know what to think. They looked a bit like us"). They describe how the Rabbits, who wear military garb and have perfect straight-backed posture, arrive by sea in a metallic golden ship that bristles with sails and steaming iron pipes. The Rabbits carry black muskets and calibrated measuring devices. As the unclothed, rust-brown animals look on impotently, the red-eyed Rabbits brutally alter the landscape. Monstrous sheep graze on artificially green paddocks, and hills are cut away to accommodate highways. By the time the indigenous creatures rebel, in sepia battle scenes, "there were too many rabbits. We lost the fights." In the bleak conclusion, the speakers lament what has been lost: "Where is the rich dark earth brown and moist?... Where are the lakes, alive with long-legged birds?" YA writer Marsden ( ) and illustrator Tan ( ), who live in Australia, describe a situation that readers on many continents can recognize (though, with the natives' pronouncement, "They stole our children," they make specific reference to their own continent's history). Marsden's concentrated prose leaves much of the storytelling to Tan's intricate, imaginative paintings, which recall the work of Peter Sís in their complexity and moral compass. In the end, tempered by a nostalgic endpaper image of wading birds on a lake, readers are presented with the irrational violence and profound waste of imperial conquest. Ages 7-up.