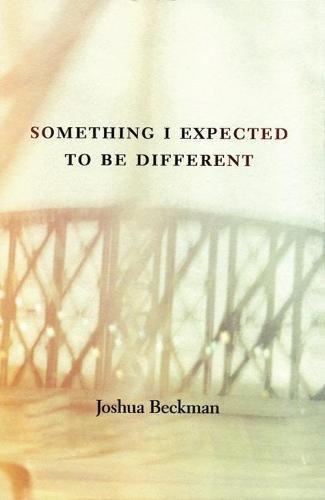 SOMETHING I EXPECTED TO BE DIFFERENT

Attempting to reclaim money worries and heartbreak from the grip of pop songs, Beckman's follow-up to the APR/Honnickman-winning debut ardently investigates the hapless repetitions of being young and coming into contact with other people, and of writing. Of the five poems in the book—all taking up the varying geography of human relations—the opening "Ode To the Air Traffic Controller" is the shortest, with two pages juxtaposing city names and relevant associations ("Acceptance, Vancouver, Tehran, Maui/ school children balloons light nothing"), while "Leave New York" ("Leave New York or the poem will kill you") laments that city's seductive money suck for gourmands of all sorts: "Do not spend $1.00 on two scallion pancakes/ ….Do not hail a ten dollar cab to blow off steam/ and smoke his back seat up/ and watch the meter jump by quarters./ Do not spend $7.50 on AXE HANDLES by Gary Snyder/ Do not spend $35.00 on the collected anyone." Beckman's liturgical rhythm and common-folk sense of humor can veer into the slack and sentimental, as in the final "Block Island": "You need my love/ and I give you a poem, you need my understanding/ and I give you the criticism/ of love's temperature always changing." But such lines feel more consciously not taken out than unconsciously left in, as the speaker's earnestness forbids tampering with the evidence, and "New York says/ do not regret, continue// It says prosper mighty anecdotal life."