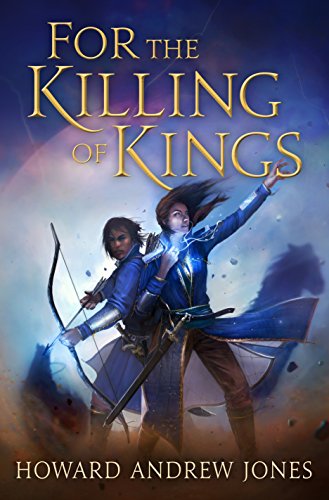 For the Killing of Kings

Creating an extensive new world full of swords, archery, magic and bravery, Jones (a longtime Pathfinder Tales tie-in novelist) takes readers on a harrowing journey through Darassus, a realm where a few heroes face an abundance of enemies. For the annual celebration of the late N’lahr, his friend and fellow Altenerai warrior, Asrahn, takes N’lahr’s sword out to clean it and realizes it’s a fake. Shortly after, Asrahn is found dead. Adventurer Kyrkenall returns to Darassus, learns of Asrahn’s death, and believes it was no accident; he and Asrahn’s squire, Elenai, investigate. They too become targets and flee the city to find the truth about the sword. When the remaining Altenerai are sent to hunt for them, warriors Varama and Rylin stay behind to conduct their own investigation. They soon realize they’re the only ones who can save Kyrkenall, Elenai, and themselves. Meanwhile, the realm’s most fearsome enemies, the Naor, are moving in. Multiple protagonists thrive amid immersive details of the realm and the creatures found therein. Jones’s exciting epic will have readers laughing, crying, and cheering for the men and women of the Altenerai. Agent: Bob MecCoy, Creative Book Services. (Feb.)