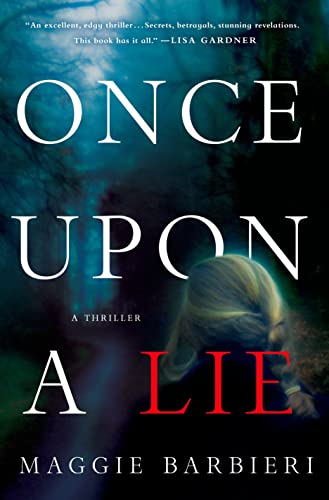 Once Upon a Lie

Barbieri takes a break from her Murder 101 series (Extra Credit, etc.) with what starts out as a standard suburban mystery but evolves into an unexpectedly riveting tale of ordinary cruelty and complicated heroism. When Sean Donovan, a pillar of the Farringville, N.Y., community, is brutally murdered, his cousin Maeve Conlon, an overworked baker and divorced mother of two, finds herself dragged into the investigation after the police begin to suspect her father, Jack Conlon, of committing the crime. Det. Rodney Poole refuses to disclose why he believes Jack, a genial ex-cop with severe Alzheimer’s, killed his nephew. Desperate to protect her family, Maeve responds by fabricating an alibi for Jack. Maeve’s troubles worsen with her discovery that a patron of her bakery, Michael Lorenzo, is beating his wife and child: she must choose between clearing her father’s name and protecting Tina and Tiffany Lorenzo. All the characters are sharply drawn, particularly Maeve, whose dark humor and stoic attitude mask an unshakeable moral core. The details of Maeve’s connection to Sean and Michael unravel with excruciating slowness, and Barbieri skillfully avoids tipping her hand until the last possible moment, leaving readers both breathless and unnerved by the novel’s conclusion. Agent: Deborah Schneider, Schneider Gelfman Agency. (Dec.)
close
Details