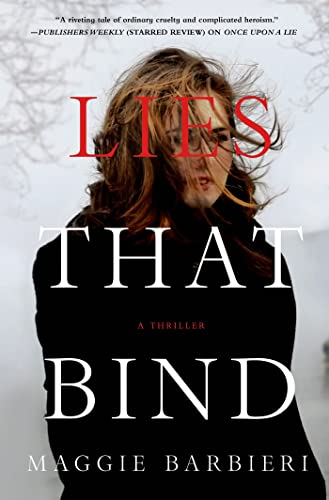 In Barbieri’s lukewarm follow-up to 2013’s Once Upon a Lie, a vindictive former neighbor approaches Maeve Conlon after Maeve’s father’s funeral to tell her she has an older sister. Soon afterward, Maeve is attacked in her Farringville, N.Y., bakery, then she finds a severed finger in her freezer. As the police investigate, she discovers that her sister, Evelyn, was born with developmental challenges and placed in Mansfield, an institution later closed because of poor conditions and abuses. Maeve joins a support group for relatives of the “Mansfield missing,” a group of residents who disappeared, but when an elderly woman from the group is killed, she realizes her quest for her sister might put her in peril. Barbieri drops frequent, heavy-handed reminders that Maeve herself is more dangerous than she appears, and secondary characters like her best friend, her ex-husband, and her oily landlord remain one-dimensional. Still, Barbieri effectively highlights the struggles faced by families with disabled children during the 1960s. [em]Agent: Deborah Schneider, Gelfman Schneider Agency. (Feb.) [/em]
close
Details