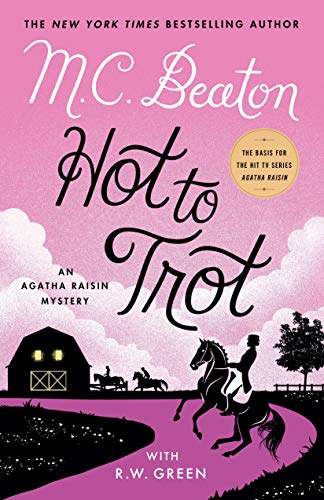 The late Beaton’s superb 31st outing for Agatha Raisin (after 2019’s Beating About the Bush) finds the witty and irascible Agatha, who runs a private detective agency in the Cotswold village of Carsely, fuming about the upcoming nuptials of her friend and former lover, Sir Charles Fraith, to his “vile fiancée,” Mary Brown-Field. No stranger to gate-crashing, Agatha shows up at an extravagant postwedding masked ball held at Charles’s grand house, where a shoving match takes place between Agatha and the new lady of the manor. When Mary is later found dead in the estate’s stables, both Agatha and Charles come under scrutiny by the police. Agatha’s investigations take her into the competitive world of horse show-jumping, as well as on a couple of edifying trips to a château in Bordeaux. This lively entertainment includes an elegantly amusing introduction by Beaton (1936–2019), outlining her road to becoming a writer, as well as an affectionate foreword by longtime friend and journalist Green, who collaborated on this book. Beaton’s fans will sorely miss her. Agent: Barbara Lowenstein, Lowenstein Assoc. (Nov.)

Correction: An earlier version of this review incorrectly noted this is the author's final book.