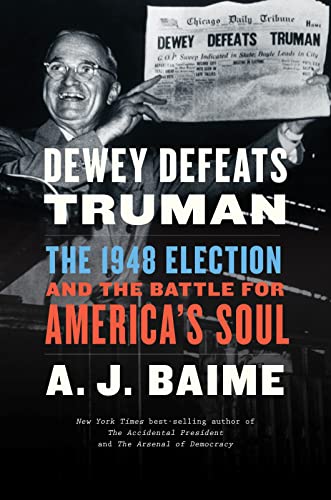 Dewey Defeats Truman: The 1948 Election and the Battle for America’s Soul

Journalist Baime, who chronicled Harry Truman’s first four months as chief executive following FDR’s death in The Accidental President (2017), delivers a spirited rundown of Truman’s come-from-behind 1948 victory over Republican challenger Thomas Dewey to win his first full term in office. Neither the media, nor pollsters, nor Truman’s own wife, Bess, thought he could win, according to Baime, who details internal divisions within the Democratic Party between Truman and “Dixiecrat” Strom Thurmond over civil rights programs and notes the electoral threat posed by Progressive party candidate Henry Wallace. Baime also details outside pressures on the campaign, including the Soviet Union’s blockade of West Berlin and turmoil in the Middle East over the creation of a “Jewish homeland in Palestine.” Undertaking a “whistle-stop” train tour across America, Truman delivered unrehearsed, plainspoken addresses to growing crowds of voters, and turned Republican opposition to his “Fair Deal” programs, including a national health-care program and the repeal of the anti-union Taft-Hartley Act, into a winning strategy. Readers looking for parallels to the current political climate will find plenty, including Baime’s contention that Republicans, Democrats, and the FBI all suspected Russia of attempting to influence the 1948 election, but by-and-large he treads familiar ground. Nevertheless, political history buffs will enjoy this colorful treatment of an oft-told story. (July)
close
Details