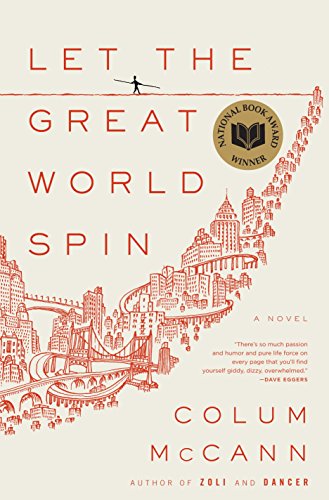 McCann's sweeping new novel hinges on Philippe Petit's illicit 1974 high-wire walk between the twin towers. It is the aftermath, in which Petit appears in the courtroom of Judge Solomon Soderberg, that sets events into motion. Solomon, anxious to get to Petit, quickly dispenses with a petty larceny involving mother/daughter hookers Tillie and Jazzlyn Henderson. Jazzlyn is let go, but is killed on the way home in a traffic accident. Also killed is John Corrigan, a priest who was giving her a ride. The other driver, an artist named Blaine, drives away, and the next day his wife, Lara, feeling guilty, tries to check on the victims, leading her to meet John's brother, with whom she'll form an enduring bond. Meanwhile, Solomon's wife, Claire, meets with a group of mothers who have lost sons in Vietnam. One of them, Gloria, lives in the same building where John lived, which is how Claire, taking Gloria home, witnesses a small salvation. McCann's dogged, DeLillo-like ambition to show American magic and dread sometimes comes unfocused—John Corrigan in particular never seems real—but he succeeds in giving us a high-wire performance of style and heart.