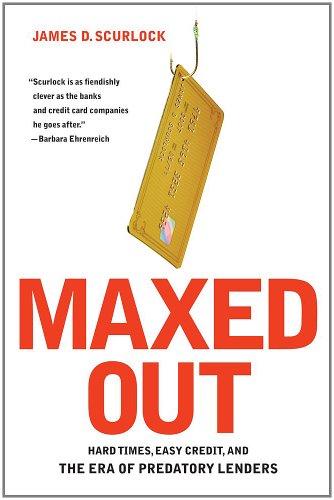 Maxed Out: Hard Times, Easy Credit and the Era of \t\t Predatory Lenders

In this companion to his documentary film of the same name, Scurlock \t\t takes a provocative though scattershot tour of "debt hell," exploring \t\t Americans' use and misuse of credit. He introduces us to upbeat debt \t\t collectors, downbeat academics, motivational speakers who insist that we can \t\t get out of debt by refinancing our homes and "skipping the a.m. latte," and \t\t "average Americans who are swimming in debt." Scurlock's villains are Visa, \t\t Citibank, credit bureaus, legislators who do the financial industry's bidding \t\t and a system of credit that "has mutated into a relentlessly efficient and \t\t voracious machine." We learn that most consumers who teeter on the brink of \t\t bankruptcy aren't bad peopleâ€”they've just taken all those \t\t no-credit-buy-anyway ads at face value. It's all pretty involving, though as \t\t with most documentarians, Scurlock is only as good as his sourcesâ€”and in \t\t print, anecdotes and testimonials aren't necessarily the best way to convey \t\t complex information or make an airtight case. The author also oversimplifies \t\t issues ("banking is about selling a single product: debt"), avoids engaging \t\t anyone who might challenge his banks-are-evil argument and turns occasional \t\t tangents into full-fledged digressions. But Scurlock deserves credit (no pun \t\t intended) for opening more eyes to this dire issue.