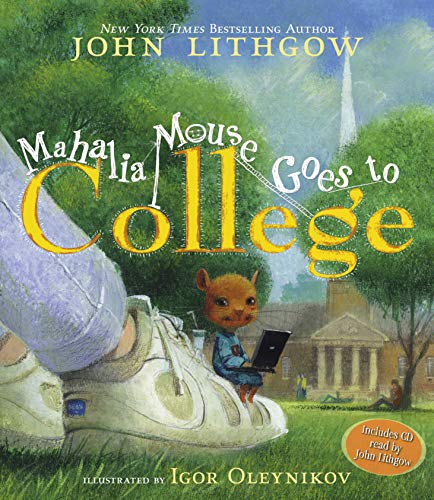 As he did in , about an art-loving squirrel, Lithgow presents another tale of an anthropomorphized critter craving culture. This time, it's the lure of higher education that captures the fancy of a brave, starving mouse who, following the scent of cheese, inadvertently becomes a stowaway in a college student's backpack. (Lithgow wrote the text as part of his keynote address to his alma mater's—Harvard College—graduating class of 2005; a CD recording of it is included.) After finding herself in a lecture hall, Mahalia becomes "professor's pet" when the instructor discovers her class notes, which clearly indicate genius tendencies. Much like the other selections in Lithgow's children's book repertoire, the adventure unfolds in musical-sounding verse, but here, because of the dire circumstances of Mahalia's family, the singsong tone seems inappropriate (e.g., "Tormented by fears of a grim holocaust,/ She pictured her home and her family lost!"). Readers willing to buy into the fantasy of a mouse-sized laptop, bookbag and graduation cap and gown may enjoy exploring Oleynikov's striking mixed-media illustrations from a mouse's viewpoint (and set on a slightly impressionistic campus recognizable to those who have visited Cambridge, Mass.). But Mahalia's determination to earn a degree works better as a quirky segment of Lithgow's commencement speech than as a picture book text, and may leave some young readers puzzled. Ages 4-8.