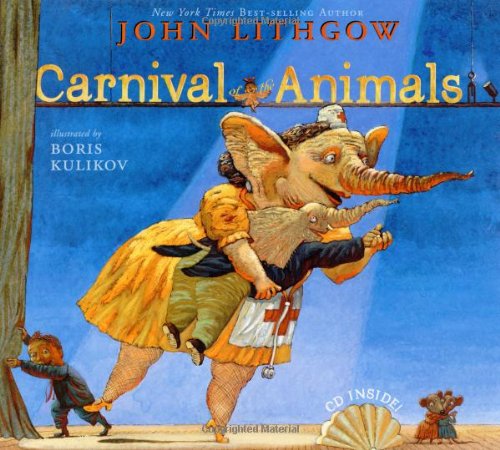 CARNIVAL OF THE ANIMALS

In this story within a ballet within an orchestral suite, Lithgow ( ) adapts to picture-book form a rhyming narration of composer Camille Saint-Saëns's 1886 composition , which the author originated for the New York City Ballet last year (a music recording along with the author's ebullient narration accompanies the book). The resulting read-aloud takes a flight of fancy as well as a few leaps of logic. During a field trip to a natural history museum, Oliver Pendleton Percy the Third sneaks away from his class and hides among the taxidermic beasts in an exhibit labeled "under repairs." After closing, as Oliver sleeps with the fishes—and antelopes, bears and beavers—the boy dreams that the various people in his life take on the guise of the museum animals. His classmates morph into a pack of rule-breaking hyenas, his teacher a lion and his mother a tearful cuckoo searching for her chick. A kindly night watchman eventually facilitates Oliver's safe return home. Lithgow gleefully tackles the challenge of inventing a child-friendly story around the music's imagery. His penchant for employing often sophisticated and fun-to-pronounce words remains intact. However, as a stand-alone text, the dreamlike quality of the poem makes for some disjointed, stream-of-consciousness vignettes that may leave some readers scratching their heads. In addition, the author occasionally bends the story line to fit the rhyme scheme, with mixed success. Kulikov's ( ) artwork acts as the glue here. He gamely stays in step, providing a fanciful plumed and furry menagerie of wild animal-human hybrids. His sophisticated yet playful treatment of size and perspective—along with copious humorous details—will have readers poring over many of the compositions. Ages 5-10.