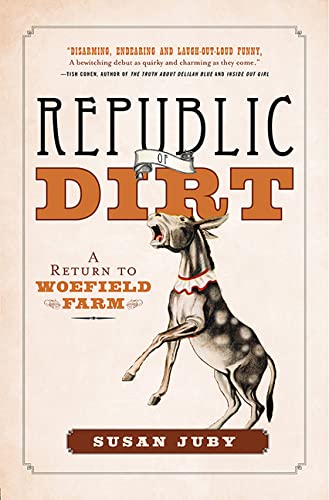 Republic of Dirt: A Return to Woefield Farm

Clouds have gathered over Woefield Farm, the unpromising expanse of B.C. scrubland where rocks %E2%80%9Cburp spontaneously out of the ground,%E2%80%9D in this funny yet surprisingly poignant follow-up to The Woefield Poultry Collective (shortlisted for the Stephen Leacock Medal for Humour). Though the farm is looking better, something is amiss. Prudence, the redoubtable twentysomething who inherited the farm from her uncle, remains indomitably optimistic but has been felled by a thyroid condition. Near-catatonically exhausted, she is unable to boss%E2%80%94er, supervise the rest of the collective: Seth, 21, the hilariously foul-mouthed agoraphobic alcoholic metalhead; reluctant bluegrass legend Earl, in his early 70s and now, with Prudence, co-owner of the farm; 11-year-old chicken fancier Sara, thoughtful, quiet, and wiser than most of the adults around her; and Bertie the sheep, %E2%80%9Ca stabilizing presence on a farm with so many extreme personalities.%E2%80%9D When mayhem erupts during parent-teacher night at Sara%E2%80%99s school, Sara%E2%80%99s parents, who have left her at the farm while their marriage disintegrates,intervene, and the entire farm is drawn into the fiery orbit of this volatile, warring couple. Alternately told by plainspoken Prudence, X-rated Seth, brave and beleaguered Sara, and irascible Earl, the book is a joyful, moving return to Woefield as its entire way of life is thrown into doubt. Agent: Hilary McMahon, Westwood Creative Artists. (Feb.)
close
Details