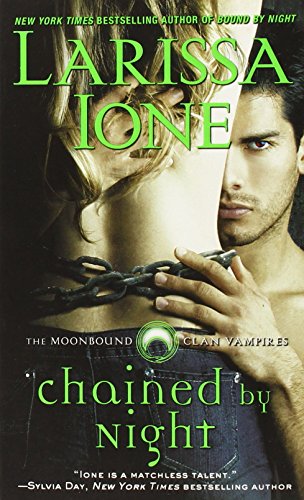 Ione’s second MoonBound Vampires paranormal (after Bound by Night) deftly uses a mixture of complex rivalries, primal violence, and sex to portray a society in which frequent vampire enslavement provokes a civil-rights dispute. Hunter, leader of the MoonBound Clan, needs help against vampire-hunters from nearby Seattle. His intended mate, Rasha, and her twin sister, Aylin, are sent to MoonBound by their father, the brutal leader of ShadowSpawn Clan, to see whether an alliance between MoonBound and ShadowSpawn is sustainable. Rasha, raised on mayhem as entertainment, thinks MoonBound is weak—Hunter allows human hobbies, like video games. But Aylin, a lifelong outsider because of a birth defect, finds hope in Hunter and MoonBound, although the Clans will go to war if Hunter mates with the wrong twin. Together, Aylin and Hunter must balance responsibility with desire in the face of increasing human trouble, inter-Clan espionage, and their own vampiric natures. Ione’s characters are relatable and sympathetic both because of and despite their id-drenched setting, and Ione’s flavor of vampirism produces a fascinating mixture of authoritarianism, atavism, and compassionate humanity that works on multiple levels. Agent: Kimberly Whalen, Trident Media Group. (Oct.)
close
Details