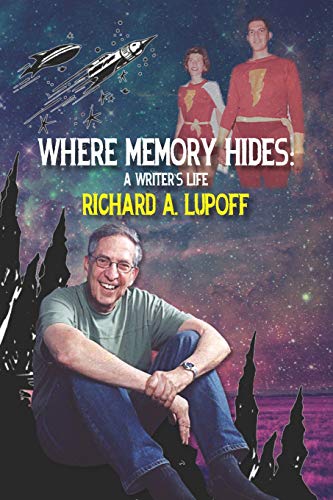 Where Memory Hides: A Writer’s Life

Lupoff’s autobiography, distilled from the many essays he has written on science fiction, comic books, old-time radio programs, genre fiction, movies, and other forms of contemporary popular culture, is a delightful tour in which the subjects that caught his fancy and stoked his enthusiasm for them are front and center. Lupoff wears more hats than Bartholomew Cubbins: he jump-started modern comic book fandom with his wife, Pat; he edited and published the fiction of Tarzan creator Edgar Rice Burroughs; he held down white-collar jobs at IBM; and, in the last two decades, he has become a prolific writer of mystery, fantasy, and science fiction. Each of these professional and semi-professional turns gets its due, along with absolutely endearing accounts of Lupoff sharing comics which his beloved brother, Jerry; enduring the rituals and discipline of military boarding school; writing up high school sports games for the local newspapers; and enjoying his lifelong fondness for the game of baseball. Lupoff writes on these subjects with the immediacy and detail of someone who is not so much recalling them as living them now. He is gracious in his praise of the many people he has known professionally, but not uncritical. He lauds much of the work of SF titan Robert A. Heinlein, but notes that because Heinlein “reached such a level that he rises above the norms of critical assessment,” he wasn’t called on some of his substandard efforts. Of one editor (left unnamed), Lupoff writes that he “was a talented, energetic salesman. He was also totally lacking in ethics. Perhaps those qualities go together.” The roster of writers and editors whom he knows and names reads like a who’s who of contemporary popular publishing. Lupoff, always a fan at heart, has left his mark on genre fiction and popular culture of the last five decades, and readers with an interest in the fields he has touched will want to read this memoir and his reflections. (Nov.)
close
Details