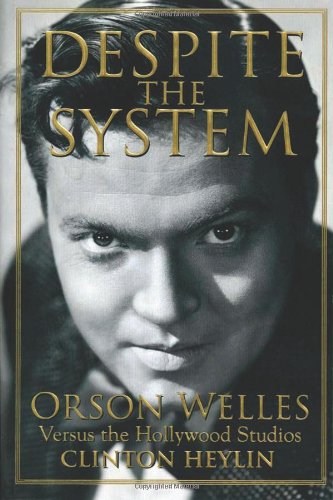 DESPITE THE SYSTEM: Orson Welles Versus the Hollywood Studios

Using shooting scripts, shooting schedules, internal studio memos, private correspondence to and from Welles, and the director's interviews and public lectures, Heylin re-evaluates the circumstances under which Welles produced the six movies he made for Hollywood studios, from 1941's through 1958's . The depth of Heylin's research on Welles's consistent workaholic approach to his art, especially his examination of a 58-page memo Welles wrote to Universal after it dismantled , aids Heylin in arguing against the claim put forth in other Welles bios that his work declined after due to his own egotism and excess. Heylin's is the most well-researched and evenhanded refutation of this line of thought published to date, and shows in detail how Welles "was undone by real people, with real motives"—most notably Columbia studio head Harry Cohn, who cut from 155 to 86 minutes. Heylin ( ; ; etc.) persuasively argues that Welles did indeed make masterpieces after , but that audiences never got to see them because of continual intervention from Hollywood studio bosses who "had no idea what [Welles] was doing, and why he was taking so long to do it." 12 b&w photos.