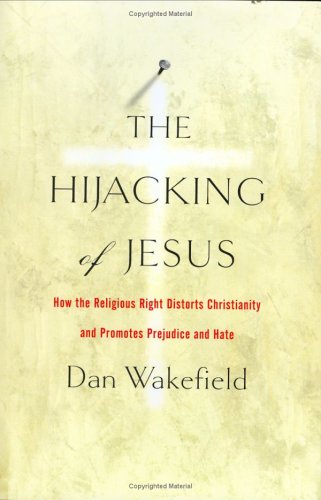 The Hijacking of Jesus: How the Religious Right Distorts Christianity and Promotes Prejudice and Hate

By his own admission, Wakefield, a journalist, novelist, screenwriter and Protestant who comes from several generations of Baptist ministers, was "one of the great slumber party of mainline American Protestant 'liberals'... whose response to the outrages of those who stole our identity as Christians was the cheap and comfortable scorn and smugger-than-thou ridicule of the disengaged." This patchwork of interviews on topics ranging from megachurches to the "wedge issues" of abortion and homosexuality, stitched together with rather snide commentary, does little to convince us that his thinking has evolved. Despite decrying the religious right's use of military terminology to establish its position, Wakefield posits that in crafting a meaningful response to the "Christian jihad," liberal Christians must similarly procure "ammunition, troops and a battle plan, a strategy." Disappointingly absent of journalistic distance, this diatribe fails to provide constructive suggestions for change. Any hopes for a refreshing ecumenical Christian defense of the true ideals of Jesus—the Jesus of the Gospel who "had no possessions, ministered to the poor and the sick, befriended societies outcasts, [and] blessed 'the peacemakers'..."—have been bitterly suppressed by a derisive, condescending tone.