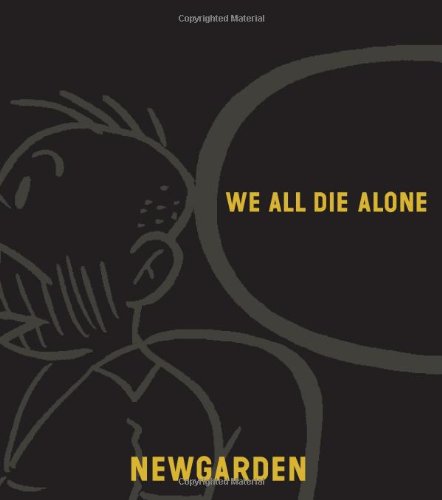 We All Die Alone: A Collection of Cartoons and Jokes

Exploring the detritus of our consumer culture, Newgarden reworks comics clichés to show the lighter side of despair. Back in the '80s, he created the Garbage Pail Kids, satirizing the lovable cuteness of products manufactured for children. Since then, in a variety of underground publications, he has subverted everyday icons and parodied traditional "joke" merchandise. Most people would merely glance at a trite cartoon showing two big-nosed guys in a bar, a man on a desert island, a clown with a psychiatrist, etc.; Newgarden is fascinated by those images became the stock in trade for cheap, disposable humor productions. He wonders if laughing at a stupid hillbilly, an alienated drunk or a prisoner on death row lets us repress the pain of our own frustrations. The drawings here work perfectly as quickie cartoons, but they also extend themselves, turning into desperate, hysterical rants.. From an ad for the Little Nun's stigmata gloves and edible rosary to an exhibition of real toilet paper wrappers, Newgarden treats nothing as sacred. In fact, he suspects that we cherish whatever distracts us from our problems. Beautifully produced—the covers are black velvet—this book shows the results of his study aren't exactly comforting, but they are fascinating and funny as hell.