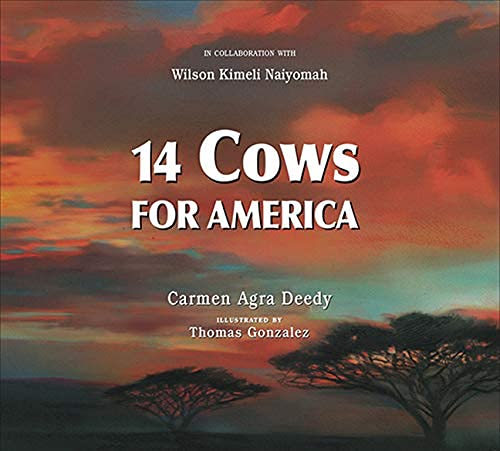 A native of Kenya, Naiyomah was in New York City on September 11, 2001. In his and Deedy's ( ) lyrical account, he returns to his homeland and tells the members of his Maasai tribe a story that had “burned a hole in his heart.” The narrative avoids specifics and refers to the events of 9/11 obliquely as the villagers listen to him with “growing disbelief”: “Buildings so tall they can touch the sky? Fires so hot they can melt iron? Smoke and dust so thick they can block out the sun?” Until they read Naiyomah's concluding note, children may not fully comprehend either his story or the villagers' subsequent actions: the tribe elders bless 14 cows, revered in Maasai culture, and symbolically offer them to the American people to help them heal. Featuring luminous images of the Maasai in vivid native dress and sweeping African landscapes, Gonzalez's pastel, colored pencil and airbrush paintings appear almost three-dimensional in their realism. A moving tale of compassion and generosity. Ages 6–10.