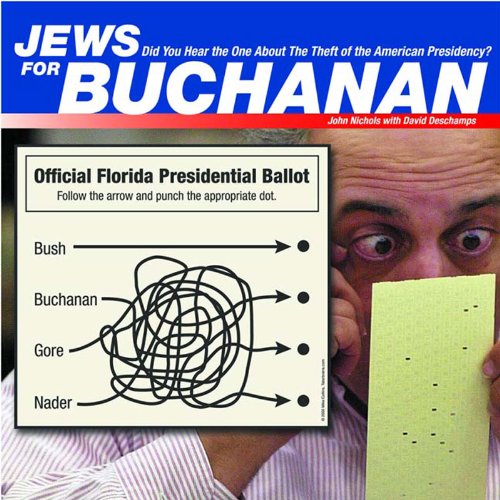 JEWS FOR BUCHANAN: Did You Hear the One About the Theft of the American Presidency?

Nichols, an experienced political observer who writes for the , assembles an impressively wide array of little-known information about the 2000 election in Florida: how TV network cutbacks left them short of news resources and vulnerable to spin and bad-faith attacks; how several counties with optical-scan equipment capable of catching mismarked ballots had high error rates because officials disabled the function to save money; how the "butterfly ballot" cost Gore over 8,500 votes, and a rush to judgment overlooked the clear precedent of a court-ordered revote in the 1968 presidential election; how a Reconstruction-era law disenfranchising felons cost Gore roughly 85,000 votes, and how Bush's and Katherine Harris's offices combined to purge the votes of thousands of supposed "ex-felons," including one county election supervisor; how blacks, with 11% of eligible voters, constituted 44% of those "scrubbed" from voter rolls and 54% of rejected ballots; how Republicans quietly challenged and disqualified hundreds of overseas Gore votes; and many other examples. Nichols combines a journalistic, point-by-point style with engaging, conversational, sometimes chilling and sometimes humorous anecdotes: Pat Buchanan, for instance, jokes about how he prayed to God not to let his epitaph read "The Man Who Cost George W. Bush the Presidency," and wholeheartedly agrees that the butterfly ballot helped save him from this particular ignominy. This volume will leave little doubt in the minds of many that Gore was robbed. But Nichols doesn't dryly build a case; he tells compelling stories revolving around the deeper, more troubling notion that the American people and democracy itself were robbed. 34 b&w illus.