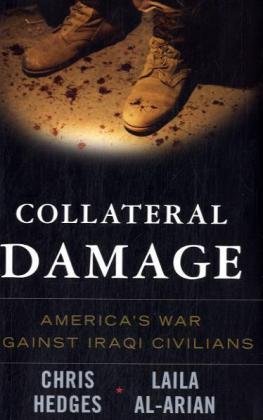 Pulitzer Prize–winner Hedges ( ) collaborates with journalist Al-Arian in this slight polemic that investigates “the suffering of Iraqi civilians” at the hands of American troops. With the help of groups like Iraq Veterans Against the War and Veterans for Peace, the authors identify and interview 50 combat veterans—their methodology, however, is noticeably flawed: their sample is too small and their selection process is skewed toward critics of the war. Interviewees like Sgt. Camilo Majia, who was court-martialed for desertion and given a bad-conduct discharge, are allowed to relate not only eye-witness but also secondhand accounts. Broad allegations implying that “most troops” are complicit in murdering unarmed Iraqis or that it is “standard” practice to plant weapons on murdered civilians go unchallenged, while the authors point to “a culture of terror and hatred among U.S. forces” for whom abusing civilians has become “a kind of perverted sport.” However admirable the authors’ aims, their selective and biased interpretation of events might disappoint readers looking for a more objective analysis.