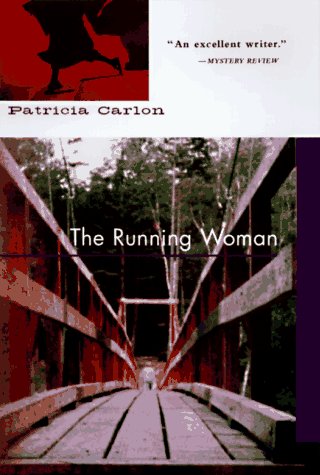 The tension never lets up in this little gem of psychological suspense, the third of Australian writer Carlon's novels to be published here (The Souvenir; The Whispering Wall). In a cozy Australian town, 14-year-old Carol Zamia drowns after falling from a plank bridge over the swollen Larapinta Creek; a witness reports seeing a woman in white fleeing from the scene. Carol's parents accuse young, wealthy widow Gabriel Endicott of being the running woman, and they try to blackmail her into paying for Carol's funeral and other expenses. Gabriel, in turn, suspects her cousin Phil of somehow being involved in Carol's death, as well as the death, 15 months earlier, of Bernice Strang, who was knifed and left in the Larapinta. Phil, along with most of the town, believes that Gabriel was the running woman and brings the police to question her. Tormented by children taunting her with the refrain, ""was she pushed or did she fall,"" Gabriel tries to escape by running through the scrub land behind her house--and gets trapped in an old well. During a stormy night, as Gabriel, who can't swim, struggles to survive the rising water in the well, Phil discovers what really happened on the bridge. Everyone is a suspect in this intensely focused, sophisticated drama. Carlon tantalizingly repeats the scene of the girl on the bridge, adding new details each time--the color of the sky, a checked raincoat, the howling of a dog. She is a master of suspense deserving of a much larger American readership. (Jan.) FYI: Soho is simultaneously reprinting Carlon's The Whispering Wall in trade paperback.
close
Details