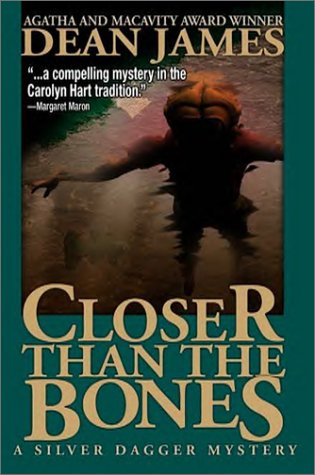 Closer Than the Bones

Fans of the traditional stately home murder case can rejoice the genre is alive and well in James's second mystery (after 2000's Cruel as the Grave). If Idlewild, a Mississippi manse, had a butler, you could be sure he'd be the murderer. Mary Tucker McElroy, Idlewild's matriarch and a belle of iron, summons her prot g s ostensibly to help her with her memoirs. In truth, she suspects one is a killer. Six months before, Sukey Lytton, a young woman writer whose viciousness had endeared her to no one, drowned. Her death was declared a suicide, but Mary Tucker thinks otherwise. To help her find the guilty party she hires Ernestine Carpenter, a retired schoolteacher in whom 40 years teaching high school English have instilled an iron will of her own. The guests assemble a motley crew of disagreeable literati whose conversation turns the dinner table into an arena for verbal gladiatorial combat. Sukey, it seems, wrote a novel, which is now missing. In it, she revealed the guests' darkest secrets. Stately homes all have dark secrets, even if the ones here turn out to be relatively tame. The final disagreeable guest to arrive is a literary agent loathed by all. Most disagreeably, he has found Sukey's manuscript: The die is cast. Before long, bodies lie draped about like antimacassars. Ernestine is a determined, if not very plausible, sleuth; but then nothing is truly plausible in this book. Still, it's fun to revisit the old stately home. Agent, Nancy Yost. (May) FYI: James is the manager of Houston's Murder by the Book. There's also a simultaneous trade paper edition ($13.95 ISBN 1-57072-183-1).
close
Details