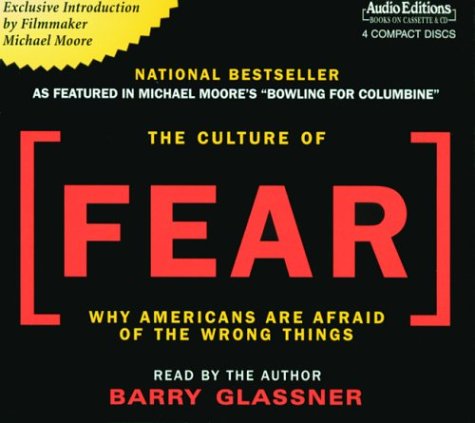 CULTURE OF FEAR: Why Americans Are Afraid of the Wrong Things

In this oddly comforting audiobook, Glassner ( ) deconstructs many commonly held beliefs about the threats of the modern world and aims to expose the media's role in keeping citizens fearful. Frightened citizens, he posits, make better consumers and more easily swayed voters. In a methodical fashion, he raises a series of public safety threats—the prevalence of road rage, middle-class heroin addiction and husband abuse, to name just a few—and then systematically tries to strike them down with statistics. More provocative are later chapters when he attempts to debunk such modern phenomena as Gulf War Syndrome and illnesses caused by breast implants. Glassner's delivery is serious but not emotionless; he keeps an even keel most of the time, but emotion does seep into his voice, most notably when talking about gun control. His reading style stands in sharp contrast to filmmaker Michael Moore, whose apparently improvised introduction is passionate and compelling; in fact, Glassner, who was featured in Moore's film , sounds a bit dull coming right after Moore. But he is clearly a man on a mission, and even though many listeners might disregard some of his explanations as oversimplifications, virtually everyone will leave this book with a more realistic, guardedly optimistic world view.