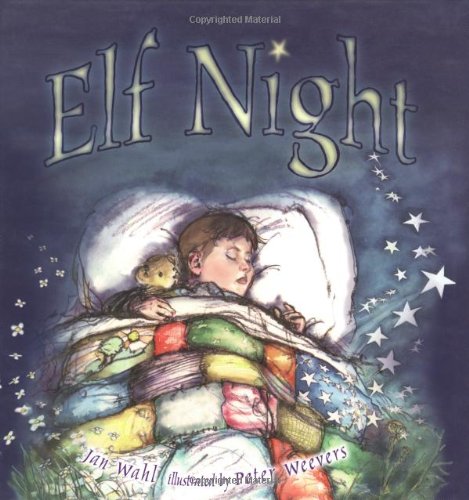 A sleepy boy witnesses a fairy-filled wonderland in Wahl's () paean to the imagination. "Sudden yellow moon/ Splashing on the floor/ Rub your eyes/ Whispers from the door!" With that, the boy climbs out of bed. Weevers's () twilight palette of lavender, light green and inky black lends an air of mystery as the child, dressed in pajamas and carrying a teddy bear, stands on the edge of a magical grove of trees. A full-bleed illustration of the woods dominates one side of the spread, then fades into white space. Led by the light of fireflies, succeeding spreads show "elf folk" with intricate dragonfly wings, gliding on the backs of crickets and riding a rat through sinewy grass to a midnight party amongst the toadstools. But the creatures must leave by daybreak. So must the boy: "Now dry your feet/ Climb back in bed/ You know you were there/ Sleepyhead." Despite a somewhat stilted rhyme scheme, Wahl's narrative effectively blurs the line between fantasy and reality. Ages 3-8