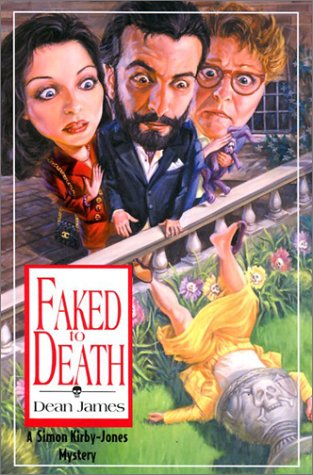 In last year's well-received , James introduced a unique amateur sleuth: Simon Kirby-Jones, a respected historian and mystery author (under female pseudonyms), an American living his dream in a cozy English village—and a gay vampire, who controls his vampirism by popping pills. The fun continues as Simon, along with his adoring young aide, Sir Giles, attends a crime writer's conference at Kinsale House presided over by its domineering chatelaine, Lady Hermione. To his astonishment, Simon discovers that the featured speaker purports to be one of his nom de plumes, Dorinda Darlington. The thoroughly nasty literary agent shared by all should be the murderer's object, but she has too much on her clients, and it's the Dorinda imposter who ends up squashed by a stone urn pushed from the terrace. The often flippant humor, overdone British slang and superior posturings of the book's self-absorbed detective may not be to every taste, but fully developed characters and a well-designed plot amply compensate.

Cruel as the Grave Closer than the Bones