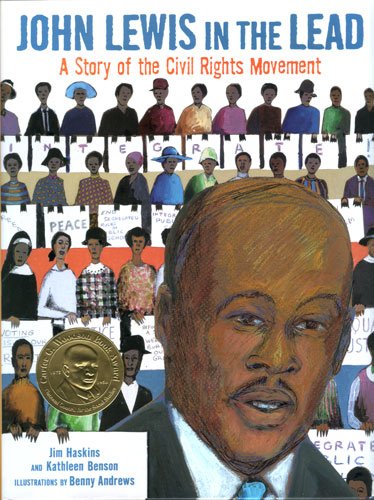 John Lewis in the Lead: A Story of the Civil Rights Movement

The authors offer a cogent account of the impressive leading role John Lewis, who has been serving as a U.S. Representative from Georgia for the past 20 years, played in the civil rights movement. The narrative incorporates intriguing vignettes: born in 1940, John aspired from an early age to be a minister and practiced preaching to the chickens in his charge on the Alabama farm where his family lived as sharecroppers. Although he was angered by segregation practices, his parents warned him to remain quiet to avoid getting in trouble. After his graduation from high school, John met Martin Luther King Jr., who urged John to study the teachings of Gandhi, and Lewis became a crusader of nonviolent resistance. He organized sit-ins at lunch counters, became a Freedom Rider and spoke at the 1963 March on Washington on the same day that King delivered his "I Have a Dream" speech. After being badly injured in the 1965 riot known as Bloody Sunday, John helped lead the triumphant march from Selma to Montgomery several weeks later, in support of voting rights for all Americans. Andrews's ( ) folk art-style illustrations, rendered in oils and fabric collage, convey the tenacity and courage of Lewis and his colleagues as well as the fierce tensions of the time. Ages 7-12.