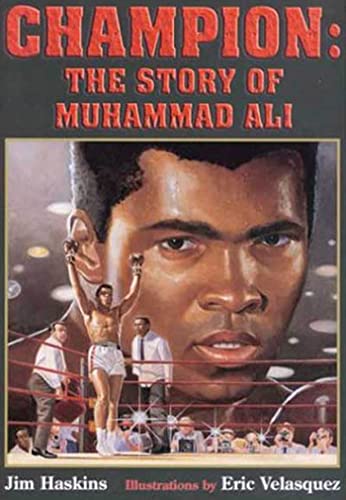 CHAMPION: The Story of Muhammad Ali

Haskins () and Velasquez () pay tribute to Muhammad Ali in this rather adoring yet noteworthy biography, which brings to light the boxing great's many types of triumphs. The author knows how to interest kids, tracing the fighter's career to his 12th birthday, when the theft of his new bicycle made him want to find the thief and beat him up; as Haskins tells it, a policeman advised him "that he had better learn how to fight first" and offered the boy boxing lessons at his gym. The hero is not invulnerable: then known as Cassius Clay, he was so afraid of flying that he bought his own parachute and wore it during the flight to the 1960 Summer Olympics in Rome. Haskins recaps familiar highlights of Ali's life and career, including his decision to join the Nation of Islam (and his later embrace of world Islam); the loss of his title as world heavyweight champion when he refused, on religious grounds, to fight in the Vietnam War; his remarkable 1974 win over George Foreman to regain the crown; his experience with Parkinson's; and his surprise appearance as the final torch-bearer at the 1996 Summer Olympics in Atlanta. A liberal sprinkling of Ali's famous rhymes provides additional insight into his personality. Velasquez does justice to the subject with his imaginatively conceived oil paintings; sometimes these approach a photographic crispness, sometimes they suggest Ali's inner victories and struggles. Informative and inspiring. Ages 6-10.