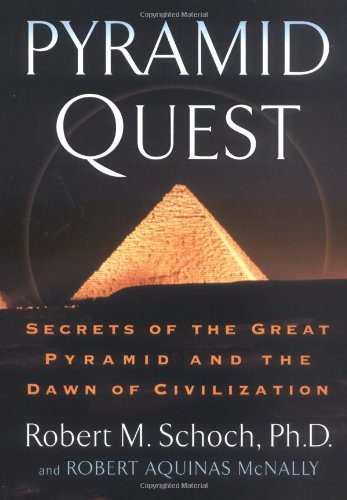 Pyramid Quest: Secrets of the Great Pyramids and the Dawn of Civilization

Traditionally, scientists and other scholars have argued that Egyptians constructed the Great Pyramid in one remarkable burst of activity during the reign of Pharaoh Khufu (2551—2528 B.C.). Drawing on archeological and scientific scholarship in their third collaboration, geologist Schoch and writer McNally challenge this view and conclude that the foundation of the edifice can be traced to the earliest Egyptian empires, as far back as 7000–5000 B.C. Among their assertions are that the Great Pyramid may not have been a tomb (no mummy has ever been found inside), but served other cultic and mythological purposes, with both the external and internal areas serving different roles in different eras; between 1500 and 500 B.C., for instance, the pyramid was probably used for ritual training and initiation. Schoch devotes more than a third of the book to appendixes that provide details on such topics as the pyramid's external dimensions, its passages and chambers, and the dating of the structure. Although the book will be controversial for some, it contains such a wealth of information about ancient Egypt and the science of the construction of the pyramids that it may be the only guide to the Great Pyramid most readers will ever need. B&w illus. .