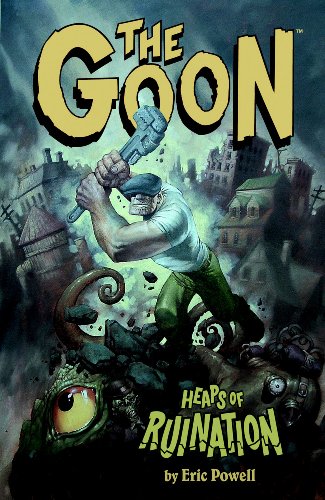 THE GOON: Heaps of Ruination

Lovers of monster comics, zombie capers and brooding heroes will enjoy the third Goon collection, with its loving mockery of horror conventions. The Goon himself is a Bogart-type antihero, and his "Rick's Café" is Norton's Pub, a dead-end joint in a landscape equal parts English village and Depression-era Chicago. This volume contains four distinct tales of peril. The first involves saving the world from the minions of the nameless man, a zombie priest; high points include an obnoxious psychic seal, an enormous robot and this beautiful bit of dialogue: "Release the great zombie chimp!" The second story features a malevolent, tentacled creature who gets his English from an "Interdimensional to English Dictionary." Somehow, the story evolves into a battle between a fire-breathing lizard and an enormous gorilla. The third piece is a guest appearance by Hellboy, drawn by Mike Mignola. Much of the fun of this tale comes from the culture clash experienced by Hellboy himself—the rest from an evil, giant octopus. The final story, "The Vampire Dame Had to Die," ventures into the gothic realm, with pretentious vampires and one very dangerous undead lady. Powell's striking art captures the ghoulish fun perfectly. If the occasional bit of potty humor seems senselessly over the top, it's quickly forgiven in the swirl of action and laughs in this tasty collection.