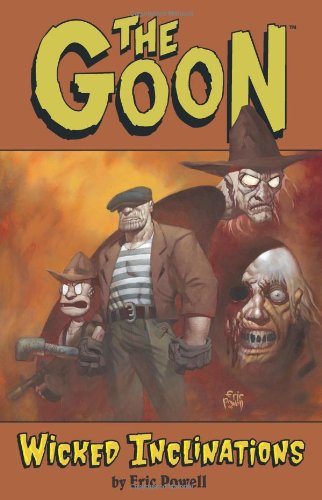 There's a certain joy knowing that a cartoonist of great skill is \t\t filling his or her own comic with the elements they love. Powell clearly loves \t\t drawing big tough guys, zombies, ghouls, men in fedoras and various \t\t combinations of the above. The fifth Goon trade paperback has all that and a \t\t Hitchcock reference to boot, a treat for fans but still accessible to new \t\t readers. The appeal is how Powell conveys that enthusiasm by drawing every \t\t creature and monster so darned well. His style continues to evolve as the book \t\t now has a lush painted look to it. This only adds to the well-rounded depth \t\t that all of Powell's figures possess and to the spooky atmosphere that the \t\t stories demand. The main story relates how the Goon's nemesis the Zombie Priest \t\t is coming up with a new kind of menace for our hero and his town. That plot \t\t often takes second place to the humor, which is so cheerfully rude and crude \t\t that it's positively endearing. At this point all the characters of Norton's \t\t Pub gel so well that their interactions are chummy enough to be entertaining no \t\t matter what chaotic destruction might be headed their way. \t\t