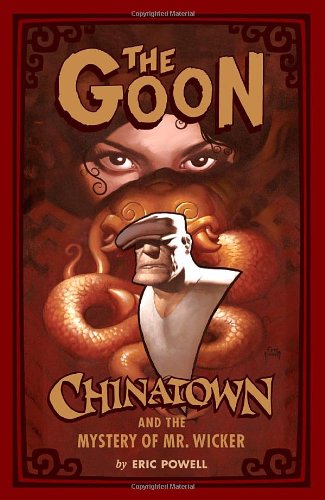 The Goon: Chinatown and the Mystery of Mr. Wicker

Eisner Award–winning series returns in its first full-length trade paperback. Antihero Goon claims to be an enforcer for mob boss Labrazio, while really running the whole operation himself. Intimidating the weak due to his immense stature and ugly mug, he runs the vaguely Depression-era San Francisco–like town where the comic is set. Now he finds that a mysterious figure made entirely of wicker is edging him out, while he’s preoccupied with a trip down memory lane. Through flashbacks we learn more about Goon’s past and the woman he almost went honest for. Though slightly paranormal and definitely pulpy, Goon and the other characters are surprisingly three-dimensional. The art is sepia-toned, giving the book a nostalgic feel. Goon himself is charming and protective of his friends, though Powell never lets him lose the brutality that makes him a believable mob boss. This installment brings romance and heartache as well as action and is sure to be a hit with fans of the series. Mixing the genre expectations of noir with an endearingly amoral lead, is pure entertainment.