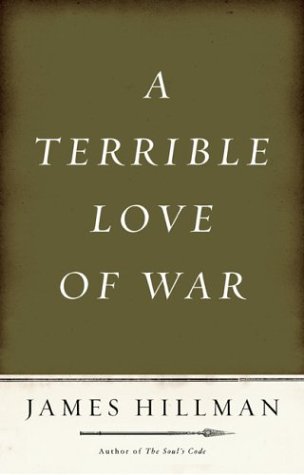 A TERRIBLE LOVE OF WAR

Why do we love war? asks Jungian psychoanalyst Hillman, author of the bestselling . One might ask in reply, Do we, in fact, love war? Hillman answers unequivocally in the affirmative, skewering modern pretension to prefer the Prince of Peace to the god of war. Mars is the central character in Hillman's exploration of war as an archetypal impulse. "The whole bloody business," he writes, "reveals a god, therewith placing war among the authentic phenomena of religion. And that is why it is so terrible, so loved, and so hard to understand." His portrayal of war as an implacable force, a primary element of the human condition, is unsettling, as is his description of war as a "beautiful horror"–but he cites enough memoirs and letters written by those in the heat of battle to convince that it can have a kind of beauty for combatants. Hillman also effectively evokes the transcendent, Mars-like fury that overtakes soldiers in battle ("I felt like a god... I was untouchable," writes one). Throughout, Hillman offers other disturbing insights: readers may feel a shock of recognition when he compares our addiction to viewing war (whether real or cinematic) to the viewing of pornography, noting that we are all voyeurs. But Hillman's mesmerizing prose loses its impact when he launches a sneering attack on Christianity (and the U.S., where "we are all Christians") for being a warrior religion. And perhaps only Jungians will understand his baffling assertion that aesthetic passion (or, in archetypal terms, devotion to Venus) can slow our ceaseless rush to war.