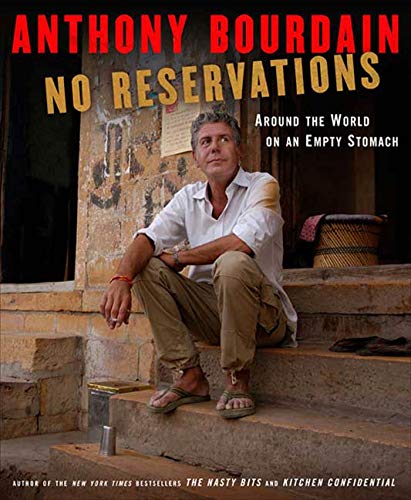 No Reservations: Around the World on an Empty Stomach

The in-your-face, hard-boiled chef Bourdain ( ) delivers another entertaining look at the best and worst places around the world in which to eat. While the book shares a title with Bourdain's popular television show, it achieves its author's goal of not being “some cynical, cheap-ass 'companion' book to the series” featuring “a bunch of blurry photos taken from the show.” The book chronicles his last three years globe-trotting—“a continuing journey of 200,000 miles”—as he's accompanied by a film crew whose “disturbing eccentricities” make up his “new dysfunctional family” with whom he shares his many adventures. The bulk of the book consists of beautifully composed photos of Bourdain's travels, “an honest and direct recording of the way life is lived in the rest of the world.” But Bourdain also provides many of his always incisive and entertaining observations, ranging from short takes on Singapore (“one of the most food-centric, food-obsessed, food-crazy cultures on earth”) and Iceland (“The notoriously stinky fermented shark was, in fact, the second worst thing I've ever put in my mouth”) to longer looks at Beirut, cooks and “Bathrooms Around the World” (worst country for bathrooms: Uzbekistan).