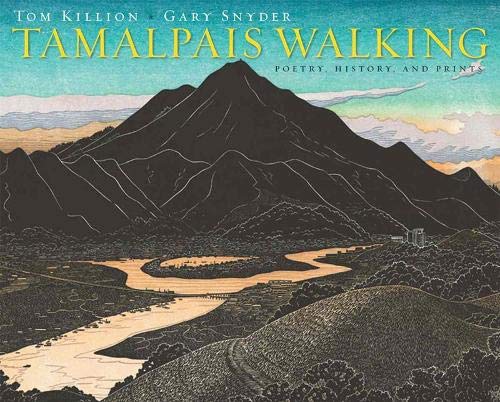 Poet Snyder refers to Mount Tamalpais as “San Francisco’s backyard wilderness.” But Killion’s brief history makes clear that the location has been an integral part of San Francisco’s outdoor culture since the 19th century. Although “Tamalpais” is a Miwok Indian word, what role the mountain played in their traditions has been lost. Place names on the mountain commemorate settlers who hiked its slopes, and the genteel poets and writers of the post–Civil War generations created most of the “Indian” legends associated with it. But it was with Kenneth Rexroth and the burgeoning San Francisco scene of the 1930s that Tamalpais found its place in American literature, and later Jack Kerouac placed scenes in on the small mountain. Snyder is Tamalpais’s greatest poet, and his essay recalling three circumambulatory hikes on the mountain is a highlight of the book. Poems by Rexroth, Snyder and Lew Welch are interspersed throughout, and multiblock color prints by Killion (who collaborated with Snyder on ) pay homage both to Tamalpais and the Japanese masters of , who perfected the complicated technique.