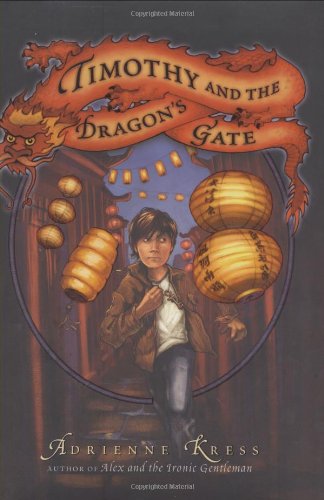 Timothy and the Dragon's Gate

Action-packed and full of reader-directed asides, Kress's sophomore novel follows in the footsteps of its predecessor, . Here, Kress introduces 11-year-old Timothy Freshwater, who, newly expelled from school, stumbles into an internship at his father's company (in a building nicknamed the “Tall and Imposing Tower of Doom”). There he meets Mr. Shen, ostensibly a mail clerk, but in actuality, an ancient Eastern dragon forced to take human form and act as a servant to whoever holds a golden key. Unwittingly and somewhat unwillingly, Timothy ends up helping Mr. Shen get to China—with a ninja, pirates and a fleet of black cabs in hot pursuit—so that he can return to his dragon form. (Among others, Timothy gets some help from Alex and the crew of the .) Brief chapters keep the story moving, and Timothy's general surliness and sardonic observations, particularly in contrast with Mr. Shen's courteousness and Alex's daring, make for plenty of comic moments (Timothy's “last thought” before plunging into the ocean after being pushed from a plane is “Whatever”). A spirited follow-up. Ages 8–12.