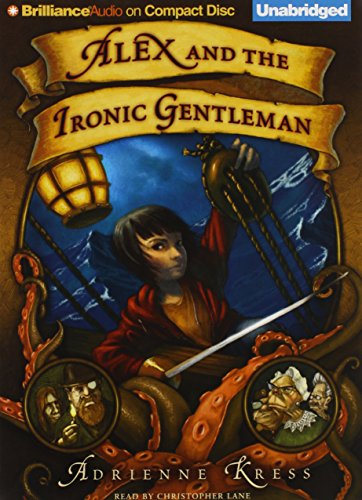 Alex and the Ironic Gentleman

As 's starred book review put it, Kress's rousing adventure is a â€œwonderful blend of whimsy and moral,â€ involving a sixth-grade heroine, Alex, who lives with her uncle, and a teacher descended from a famous pirate and heir to his treasure. Alex is convinced the treasure map is hidden in the stately manor run by the vicious old ladies of the Daughters of the Founding Fathers Preservation Society. Returning home victorious, Alex discovers her beloved uncle has been killed and her teacher kidnapped. Lane's expressive narration never overpowers the story's simple, observational prose style. He brings to life the many colorful characters by giving them distinctive voices, such as the Extremely Ginormous Octopus whose large, booming, throaty voice would fill a canyon; the refined, aristocratic Charles, a mad scientist; and the snarling bearded gentleman. Listeners will eagerly stay tuned to this fantastical quest. Ages 10-up.