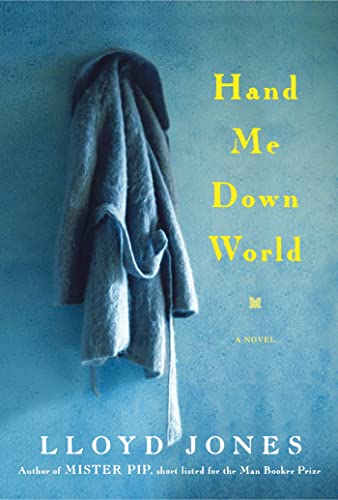 Hand Me Down World

Jones's disturbing but beautifully written account of a wronged mother's long journey to find her son is a near unmitigated downer. An unnamed African woman's story is told by incidental witnesses, beginning with a fellow hotel worker in Tunisia who relates the story of her seduction by a German hotel guest, her pregnancy, and the abduction of the baby by her seducer. He has her sign papers at the hospital and leads her to believe he will take her and the baby with him back to Germany but instead abandons her and takes the baby. The unnamed woman sets out on a harrowing quest a few years later, nearly dying in her attempt to get into Europe. Then, with the cloudily motivated help of various strangers, she finds her way to Berlin, where her son lives with his craven father, whose greed and selfishness are almost a relief when contrasted with the subtler humiliating crimes of the other players. Learning all this history through the perspective of secondary characters has a frustrating effect, further marginalizing an already obscenely oppressed woman. When Ines —an assumed name, the only one the unnamed woman is ever given—at last has her turn to speak, there is little satisfaction. She seems at times simple and goodhearted and at other times, an unintelligent martyr. Even allowing for her being traumatized, her passive reactions to being sexually coerced, arrested, and denied access to her son are not easily justified. For his dedication to moral complexity and his wholly unsentimental portrayal of an outsized tragedy, though, Jones (Mister Pip) deserves praise. (Oct.)
close
Details