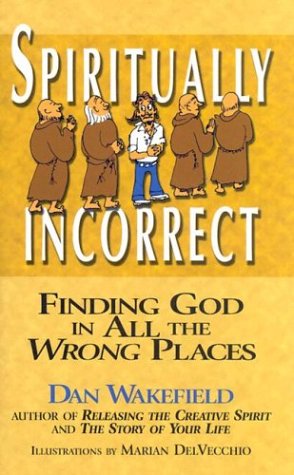 SPIRITUALLY INCORRECT: Finding God in All the Wrong Places

Although Wakefield culls these essays from, among other sources, his Beliefnet column "Spiritually Incorrect," the titular concept remains rather vague throughout the book. In his introduction, he gives several examples of being spiritually incorrect, such as getting a facelift, owning a convertible and having a tattoo. His explanation of who finds these practices spiritually incorrect is a bit labored and confused; at times, he seems to be rebelling against "my fellow Christians who are of the fundamentalist persuasion" and at other times he seems more interested in scandalizing yoga-practicing vegetarians. Most chapters are very brief; they introduce an idea (some of which, such as the spiritual correctness of taking Prozac, are no longer very controversial), include a few observations and then simply end. For example, in a chapter that rather curiously employs a question-and-answer format (it's not clear if this is from an advice column he has written), Wakefield discusses whether or not it is "spiritually incorrect" to eat steak. He begins by decrying the rigidity and judgment of some vegetarians and then meanders into a comparison of the relative merits of low and high carbohydrate diets, and then the chapter ends. Several other chapters in the book suffer from a similar lack of focus and substance. The final third is a gem, however, with several profiles of spiritually incorrect "saints" such as Dorothy Day, Henry Nouwen and Reynolds Price. These are people Wakefield knows or has known personally, and his insight into their lives is the strongest element of the book.