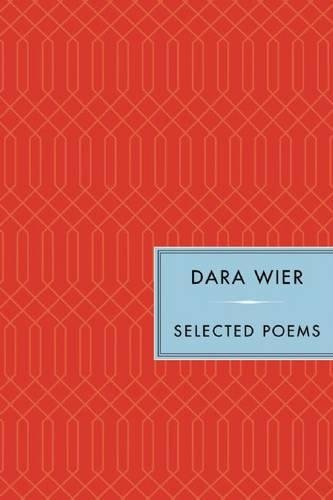 Ups and downs, uneven passions and sometimes apparently random associations are the paradoxical constant in this first from Wier ( ), drawn (without new work) on eight published books of short poems. Wier—now much esteemed as a teacher of poets at the University of Massachusetts–Amherst—began with tight lines haunted by disappointments: poems of the 1970s and 1980s portray a desperate writer with a void, or a nightmare, inside: “A nail had come loose from a vortex/ she'd driven.” To move through this chronological selection is to see Wier grow more whimsical, in her titles (“Nine Sunflowers Standing Seven Feet High Wintering Over in a Snowy Field”) and in her verse, with surreal or nonsensical lists: “A pencil sharpener ascends Mt. Everest./ A bus believes it is a thumbtack./ A baby turns itself inside out and nobody notices... Two doorways fall in love.” Such phrases, in verse and in prose poems, recall Wier's companion, James Tate. Strangest and farthest from prose sense, and farthest from Tate, are the investigations of (2005): “(so we deviated) (we variegated) (you were the/ marshal of that parade).” Such poems are not whimsies but quizzical visions, or dreams, in which readers might try hard to get lost.