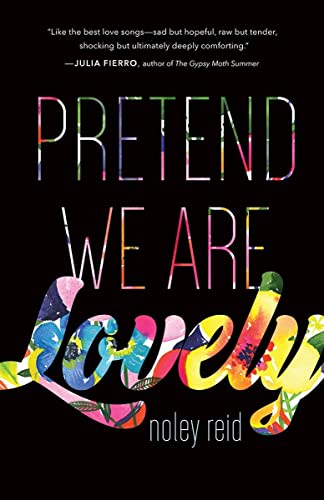 Pretend We Are Lovely

Reid transforms the story of a mentally ill mother setting off the implosion of a tight-knit nuclear family into a sharp-edged portrait of the ways in which each member of the family is shaped by the others, with no villains, only victims. At the heart of the story, set in a Virginia university town in 1982, is food, with which no one in the Sobel family has an uncomplicated relationship. Housewife mom Francie obsesses over calories and spends her days running in both literal and figurative circles. Philosophy professor dad Tate, off in his own apartment after starting an affair with an undergrad, eats raw refrigerated biscuit dough out of the tube. Ten-year-old Enid takes after him, with food an equal source of comfort and shame, while 12-year-old Vivvy, drawn against her will to the boy next door, models herself on her mother. The fifth member of the family is a “fussy, obstinate, compulsive boy” who died seven years earlier in horrific circumstances. He suffered from an illness, the main manifestation of which was an insatiable appetite, and continues to haunt the Sobels. Told in bright shards of chapters from the points of view of the four survivors, the novel never descends into mere case history. Set mostly during a single summer, it reaches a climax during Halloween, that sugar-laden holiday in which boundaries are often broken. As Francie reaches a breaking point, the girls act out in ways that endanger themselves and others. This is a tense, vivid, and sharp novel that captures the complex relationships between the Sobel family members, particularly between sisters Vivvy and Enid. (July)
close
Details