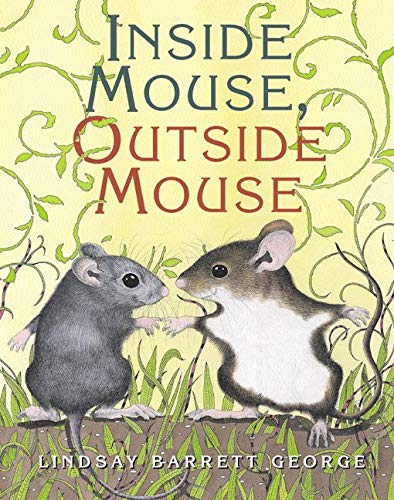 George ( ) employs her always impressive talent for detail to marvelous effect in this story of two mice whose lives run on parallel tracks—one inside a house, the other outside—until they meet at a window. The unseen narrator, a resident of the house, chronicles the rodents' transit. George has great fun showing how the almost identical descriptions that appear opposite one another on the spreads can yield very different visual results. The gray-brown inside-mouse runs "below the spider"—a drab brown insect knitting a cobweb bridging two corners—"and over the ball," which is festooned with stars. The golden-brown outside-mouse runs "below the spider"—a startling yellow-and-red creature looming from a pink wildflower—"and over the stone" that's also impressively decorated, albeit by the forces of erosion. In one cheeky spread, the inside mouse runs behind a book on birds, while the outside mouse runs behind a handsomely feathered example of the real thing. On every page, George couples her eye for particulars (the warp and woof of animals' coats, the mosaic of objects that make up the vistas of natural and domestic life) with brilliant colors and a masterful sense of light. Readers will delight in the mice's curiosity and determination, savor the richness of their respective worlds, and eagerly speculate on whether their hard-won meeting is a first or regular occurrence. Ages 3-up.