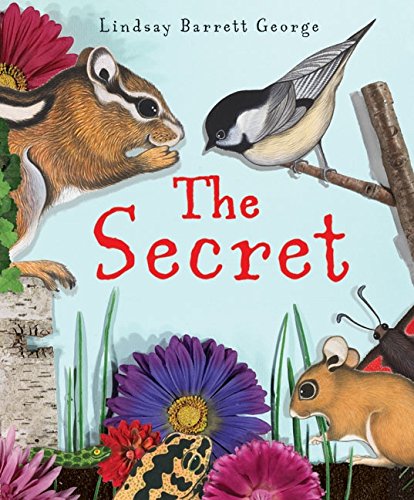 Spoiler alert: the secret is Mr. Snail's love for a fetching lady gastropod—a confidence that is passed along a lengthy chain of critters until it reaches its intended destination (and she responds in kind). But the contents of the conveyed message are not the main attraction here. Rather, it's George's ( ) large-scale collage spreads, which combine 3-D naturalistic elements (flowers, tree bark, rocks) with cutouts of lissome and brilliantly colored animal portraits. A bold dotted line runs through each illustration, connecting one teller to the next, and youngsters will likely enjoy tracing this often playfully circuitous route. A vividly variegated frog hops over a line-up of flowers before telling the secret to a rakish, yellow-spotted salamander; a worm winds through an elaborate earth tunnel before surfacing to spread the word to a startlingly lifelike chickadee. George attempts to make the one line of text that runs along the bottom of the pages as evocative as her pictures, with varying degrees of success (it doesn't quite jibe, for instance, that the caterpillar "tickled" the secret to the worm). But that's a small matter, given the pictures' gleeful, genial splendor. Ages 3-up.